Help your website visitors to buy smarter on Walmart by embedding this price history chart on your website.

With WalTrack you could potentially save $6.98 on this product. 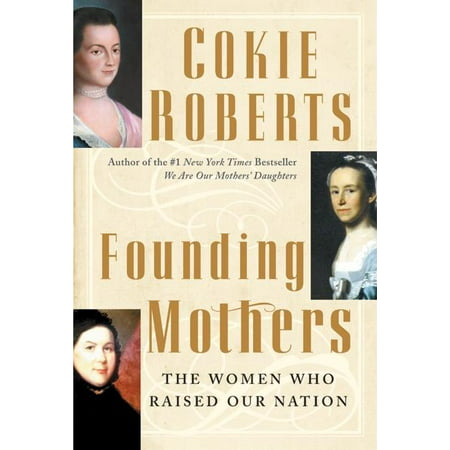 "In ""Founding Mothers,"" Roberts tells the fascinating yet overlooked story of the women who helped create a new nation. While the men were debating the merits of revolution, these women were living it even as the Redcoats landed on their doorsteps. Cokie Roberts's number one New York Times bestseller, We Are Our Mothers' Daughters, examined the nature of women's roles throughout history and led USA Today to praise her as a custodian of time-honored values. Her second bestseller, From This Day Forward, written with her husband, Steve Roberts, described American marriages throughout history, including the romance of John and Abigail Adams. Now Roberts returns with Founding Mothers, an intimate and illuminating look at the fervently patriotic and passionate women whose tireless pursuits on behalf of their families -- and their country -- proved just as crucial to the forging of a new nation as the rebellion that established it.While much has been written about the men who signed the Declaration of Independence, battled the British, and framed the Constitution, the wives, mothers, sisters, and daughters they left behind have been little noticed by history. Roberts brings us the women who fought the Revolution as valiantly as the men, often defending their very doorsteps. While the men went off to war or to Congress, the women managed their businesses, raised their children, provided them with political advice, and made it possible for the men to do what they did. The behind-the-scenes influence of these women -- and their sometimes very public activities -- was intelligent and pervasive.Drawing upon personal correspondence, private journals, and even favored recipes, Roberts reveals the often surprising stories of these fascinating women, bringing to life the everyday trials and extraordinary triumphs of individuals like Abigail Adams, Mercy Otis Warren, Deborah Read Franklin, Eliza Pinckney, Catherine Littlefield Green, Esther DeBerdt Reed, and Martha Washington -- proving that without our exemplary women, the new country might never have survived.Social history at its best, Founding Mothers unveils the drive, determination, creative insight, and passion of the other patriots, the women who raised our nation. Roberts proves beyond a doubt that like every generation of American women that has followed, the founding mothers used the unique gifts of their gender -- courage, pluck, sadness, joy, energy, grace, sensitivity, and humor -- to do what women do best, put one foot in front of the other in remarkable circumstances and carry on."

Stay in the loop 🤩

Hi, I'm Jelle, the founder of Waltrack. Every month I send a newsletter with the biggest price drops, saving tips and updates on Waltrack.

Enter your email to receive it!

All best sellers on Walmart by category